Budapest (seen here) and Vienna are both along the Danube River and only three hours apart. Photography by Iris and Light

When you think of the epitomized grandeur of Eastern Europe — those vaunted palaces and castles whose razorlike spires tear at the sky — you’re likely thinking of Vienna and Budapest. Linked by the Danube and their relatively preserved Old World charm, they can mush together in the mind’s eye, but their distinct legacies are uniquely their own. Luckily, there’s only three hours of road between them, so you can have your cake — and your goulash too.

Cozied against the Danube with a slew of luxury shops, restaurants and bars, Belváros is Budapest’s most popular hub for tourists. Known as the Inner City, the district’s art nouveau architecture and density of fanciful shops are enough of a draw themselves — but its proximity to the city’s other thrills, such as the hip, artsy Jewish Quarter and posh shopping on Andrassy Avenue, and its convergence of three metro lines make the area a can’t-miss.

A restaurant along the Danube in Belváros. Photography by Alamy

Just west up the river and a tad more inset, Vienna’s own Inner City has a magnetic energy all its own. Topping every list should be the MuseumsQuartier, which includes the palatial museums of natural history and art history, as well as a smattering of galleries and temples of baroque POV. Once you’ve had enough of the institutionalized culture, grab a bike and pedal along the leafy Donaukanal path to see a never-ending spray of street art and locals sporting about. MuseumsQuartier, Museumsplatz 1, 1070 Wien, mqw.at

The Leopold Museum in Vienna’s MuseumsQuartier. Photography by Stefan Buertbauer

For an impeccable bird’s-eye view of the Queen of the Danube, there’s no better place than the neo-Gothic Fisherman’s Bastion in Budapest’s Castle District. From its pristine white turrets, you can gander at nearly all of the city’s stunning architecture in one fell swoop, including its crown jewel, the Parliament Building, in permanent blazing beauty against the waterfront. A few forints will get you access to elevated, uncrowded views and the most panoramic espresso you’re likely to find. Fisherman’s Bastion, Szentháromság tér, 1014, fishermansbastion.com; Parliament Building, Kossuth Lajos tér 1-3, 1055, parlament.hu

Where architecture is concerned, Vienna beguiles on just about every corner. While choice vantages are scattered about the city, St. Stephen’s Cathedral, a landmark in its own right, is among the most popular. Visitors can take an elevator to the north tower to get a load of the massive Pummerin bell or opt for some 350 spiral steps for sweeping views from the south tower. If that sounds daunting, take a seat in the Giant Ferris Wheel at the entrance to Prater amusement park for scenic dips above and below the horizon. St. Stephen’s Catherdral, Stephansplatz 3, 1010 Wien, stephanskirche.at; Riesenradplatz 1, 1020 Wien, wienerriesenrad.com

With soaring ceilings and a zoo of vendors hawking produce and a rainbow of spices, the Great Market Hall is a bustling one-stop shop for all things Hungarian cuisine. Upstairs, be sure to elbow your way to some gulyás (goulash), the hearty national stew of beef, onions, tomatoes and spices. Or try lángos, a versatile disc of fried dough topped with just about anything — grated cheese, sour cream, bacon, onion and parsley, jam, sausages or just butter. Vámház krt. 1-3, 1093

The Great Market Hall in Budapest. Photography by Alamy

Since the 16th century, Naschmarkt has housed Vienna’s own helping of roaring food exchanges, albeit a bit more international. Whether here or beyond, do try to finagle at least one traditional wiener schnitzel, a fried, crumbed, lemon-wedged piece of veal so loved in this city that any question into who can claim its murky origins becomes moot. 1060 Vienna

Whether public or private, open air or extra hot, the storied baths of Budapest will put the city in luxurious relief, bubbling forth from the city’s nearly 125 natural hot springs. Gellért, Király and Rudas are among the most popular, but do settle on what’s important before deciding — what price, how crowded, if clothes are required. Gellert Thermal Bath, Kelenhegyi út 4, 1118, gellertbath.com

The indoor pool at Gellért Bath. Photography by Trey Ratcliff

While both share in these delights, when it comes to cafés, Vienna takes the cake. Over three centuries, its unhurried, silver-trayed coffeehouses became home to every stripe — artists, writers, intellectuals, socialites, commoners — even Mozart and Beethoven performed in them.

Once serving little more than simple cakes like gugelhupf, a stalwart Bundt studded with raisins and almonds, the cafés’ confections have grown only more decadent. Don’t be shy about the city’s sweetest controversy: the sachertorte, a deceptively simple chocolate gâteau commissioned in 1832 by Prince Metternich and later deemed fit for the emperor. Its creators’ mixed history at Café Demel and Hotel Sacher unfurled 20 years of debate over its official recipe and just how many jammy apricot layers made it the real deal — ending with each slice brandishing its own edible seal of authenticity. Taste both sides, and let your mouth decide what’s truer. Café Demel, Kohlmarkt 14, 1010 Wien, demel.com; Café Landtmann, Universitätsring 4, 1010 Wien, landtmann.at

A waiter at Vienna’s Café Landtmann. Photography by Stefan Fuertbauer 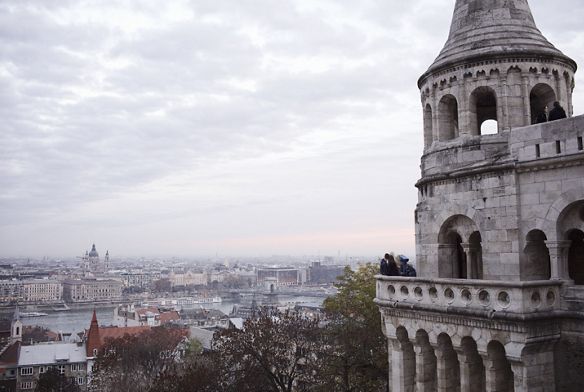 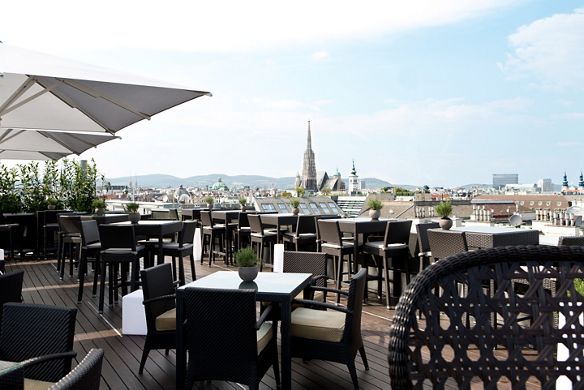 There's no better time than summer to travel to a new destination, especially one that offers boundless dining, sightseeing and of course, relaxation. 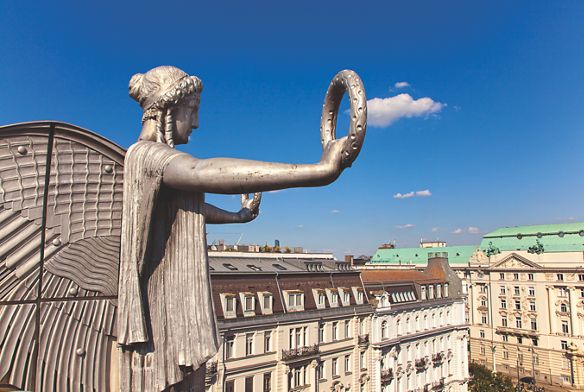 We toast Vienna’s most celebrated street, the Ringstrasse, with a tour of the city’s pleasures.